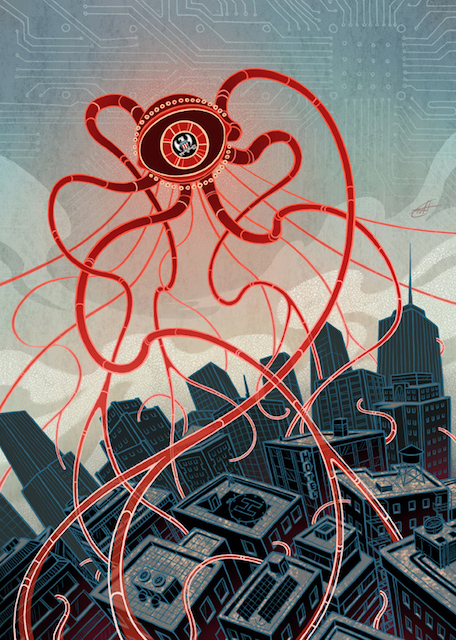 Is there any question now that the Deep State is preparing to expel President Donald Trump from the body politic like a necrotic organ?

The Golden Golem of Greatness has floundered pretty badly on the job, it’s true, but his mighty adversaries in the highly politicized federal agencies want him to fail spectacularly, and fast, and they have a lot of help from the NY Times / WashPo / CNN axis of hysteria, as well as such slippery swamp creatures as Lindsey Graham.

There are more problematic layers in this matter than in a Moldavian wedding cake. America has been functionally ungovernable for quite a while, well before Trump arrived on the scene. His predecessor managed to misdirect the nation’s attention from the cumulative dysfunction with sheer charm and supernatural placidity — NoDrama Obama. But there were a few important things he could have accomplished as chief exec, such as directing his attorney general to prosecute Wall Street crime (or fire the attorney general and replace him with someone willing to do the job). He could have broken up the giant TBTF banks. He could have aggressively sponsored legislation to overcome the Citizens United SOTUS decision (unlimited corporate money in politics) by redefining corporate “citizenship.” Stuff like that. But he let it slide, and the nation slid with him down a greasy chute of political collapse.

Which we find embodied in Trump, a sort of tragicomic figure who manages to compound all of his other weaknesses of character with a childish impulsiveness that scares folks. It is debatable whether he has simply been rendered incompetent by the afflictions heaped on by his adversaries, or if he is just plain incompetent in, say, the 25th Amendment way. I think we’ll find out soon enough, because impeachment is a very long and arduous path out of this dark place.

The most curious feature of the current crisis, of course, is the idiotic Russia story that has been the fulcrum for levering Trump out of the White House. This was especially funny the past week with the episode involving Russian Foreign Minister Lavrov and Ambassador Kislyak conferring with Trump in the White House about aviation security around the Middle East. The media and the Lindsey Graham wing of the Deep State acted as if Trump had entertained Focalor and Vepar, the Dukes of Hell, in the oval office.

Why do you suppose nations employ foreign ministers and ambassadors, if not to conduct conversations at the highest level with other national leaders? And might these conversations include matters of great sensitivity, that is, classified information? If you doubt that then you have no understanding of geopolitics or history.

The General Mike Flynn story is especially a crack-up. Did he accept a $20,000 speaking fee from the Russian news outlet RT in his interlude as a private citizen? How does that compare to the millions sucked in by the Clinton Foundation in pay-to-play deals when Madame was secretary of state? Or her six-figure speeches to Goldman Sachs and their ilk. Are private citizens forbidden to accept speaking fees or consulting fees from countries that we are not at war with? I’d like to know how many other alumni of the Bill Clinton, Bush-II and Obama admins have hired themselves out on this basis. Scores and scores, I would bet.

Trump’s adversaries might not get any traction on the Russia story, but they may enrage the rogue elephant Trump enough in the process that he will appear sufficiently incompetent to run him over with the 25th Amendment, and I think that is the plan for now. Of course, there are some jokers in the deck. A really striking one is the story of murdered DNC staffer Seth Rich last July. He was shot in the back on the street outside his apartment one night by persons as yet unknown, and 12 days later more than 40,000 DNC emails landed at Wikileaks. His laptop is reportedly in the possession of the DC cops — if it hasn’t been dumped in the Potomac. I’m generally allergic to conspiracy theories, but this looks like an especially ugly story, which might ultimately be clarified if-or-when Julian Assange of Wikileaks ever divulges the source of that data dump. Anyway, the new Special Counsel at the DOJ, former FBI Director Robert Mueller, may have to venture down that dark trail.

One way or another, though, the Deep State is determined to drive Trump from office. In the final rounds of this struggle, Trump might conceivably undertake a sudden swamp-draining operation: the firing of a great many politicized Intelligence Community officers, especially the ones legally culpable for leaking classified information to media — another area that Mr. Mueller could also shine a light on. The colossal security apparatus of this country — especially the fairly new giant NSA — has become a monster eating America. Somebody needs to literally cut it down to size. Perhaps that’s the Deep State’s main motive in moving heaven and earth to dump Trump.

When they do, of course, they are liable to foment an insurrection every bit as ugly as the dust-up that followed the shelling of Fort Sumter. Trump, whatever you think of him — and I’ve never been a fan, to put it mildly — was elected for a reason: the ongoing economic collapse of the nation, and the suffering of a public without incomes or purposeful employment. That part of the common weal is liable to completely whirl down the drain later this year in something like a currency crisis or a depressionary market meltdown engineered by yet another Deep State player, the Federal Reserve. That and the ejection of Trump could coincide with disastrous results.