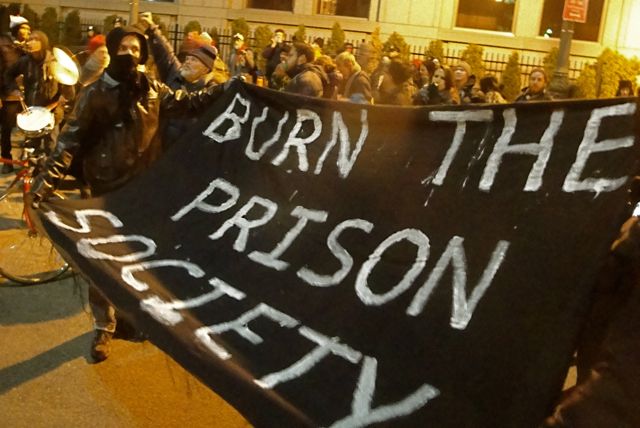 “The adjective and the noun don't match.”

The enduring “Good War” fable goes well beyond Memorial Day barbecues and flickering black-and-white movies on late night TV. According to accepted history, World War II was an inevitable war forced upon a peaceful people thanks to a surprise attack by a devious enemy.

Then and now, WWII has been carefully and consciously sold to us as a life-and-death battle against pure evil. For most Americans, it was nothing less than good and bad going toe-to-toe in khaki fatigues.

However, there are a few, um… inconvenient details about the “Good War” we may wanna factor into this perception, e.g.

“We have ceased to be human beings”
On Feb. 19, 1942, the sainted Franklin Delano Roosevelt signed Executive Order 9066 giving the army the unrestricted power to arrest -- without warrants or indictments or hearings -- every Japanese-American on a 150-mile strip along the West Coast (roughly 110,000 men, women, and children) and transport them to internment camps in Colorado, Utah, Arkansas, and other interior states to be kept under prison conditions.

In the words of Japanese-American Hatsuye Egami, a former prisoner of an American internment camp: "Since yesterday, we Japanese have ceased to be human beings. We are numbers. We are no longer Egamis, but the number 23324. A tag with that number is on every trunk, suitcase, and bag. Tags, also, on our breasts."

Japanese-Americans remained in custody for over three years and, thanks to an unending wave of anti-Japan propaganda, what little public debate existed was hardly reasoned. In 1942, a Los Angeles Times writer defended the forced relocations by explaining to his readers that "a viper is nonetheless a viper wherever the egg is hatched: so a Japanese-American, born of Japanese parents, grows up to be a Japanese, not an American."

In nearby countries, sentiments ran along these same lines, as historian Daniel S. Davis reports in his book, Behind Barbed Wire:

"Canada enacted similar removal and internment programs … Many Latin American countries were shaken by anti-Japanese riots. Some shipped their Japanese people to the United States at the urging of Washington. They were held in the camps our government set up … Ironically, after the war ended, the U.S. government tried to deport these Latin American Japanese on the grounds that they had entered the country without passports or official visas."

“Obvious racial discrimination”
Life in the internment camps entailed cramped living spaces with communal meals and bathrooms. The one-room apartments measured 20 by 20 feet and none had running water. The internees were allowed to take along "essential personal effects" from home but were prohibited from bringing razors, scissors, or radios.

Outside the shared wards were barbed wire, guard towers with machine guns, and searchlights. The atmosphere was often charged with a hostile discomfort.

Anger and disillusionment grew and these emotions led to tension and sometimes violence. On Dec. 5, 1942, a scuffle between internees led to the U.S. military police firing shots into the crowd -- killing one Japanese-American man, Jimmy Ito.

There were those who defied relocation. Fred Korematsu remained in San Francisco with his Caucasian girlfriend until he was arrested and jailed. It was then that he met with an ACLU lawyer and decided to challenge the constitutionality of the internment camps. Korematsu, of course, lost when the Supreme Court upheld the decision in December 1944 (this was case cited in the Times article mentioned earlier).

Justice Murphy, expressing a minority opinion, dissented on the grounds that since the camps were "an obvious racial discrimination, the order deprives all those within its scope of equal protection of the laws guaranteed by the Fifth Amendment."

“We are just being lulled into a false sense of security”
While 110,000 Japanese-Americans suffered in prison camps, the U.S. media whipped up a post-Pearl Harbor frenzy of fear on the West Coast. If one were to believe the news reports of the day, it was always just a matter of hours until Japanese Zeros would be spotted over Hollywood, or anywhere on the Left Coast.

Renowned commentator Edward R. Murrow, for example, stirred up Fifth Column worries by telling an audience in Seattle that if their city was ever bombed, they would "be able to look up and see some University of Washington sweaters on the boys doing the bombing."

Although there was never a proven case of any type of sabotage by Japanese-Americans on the West Coast, this did little to ease the minds of men like California attorney general Earl Warren (later the Chief Justice of the U.S. Supreme Court). "I believe that we are just being lulled into a false sense of security," Warren declared, "and that the only reason we haven't had disaster in California is because it has been timed for a different date."

“The fundamentals of the American system”
The dislocated Japanese-Americans incurred an estimated loss of $400 million in forced property sales during the internment years, and therein may lay a more Machiavellian motivation.

"A large engine for the Japanese-American incarcerations was agri-business," says Michio Kaku, a noted nuclear physicist and political activist whose parents were interned from 1942 to 1946. "Agri-businesses in California coveted much of the land owned by Japanese-Americans."

The U.S. Supreme Court has never overruled its decision but a formal apology came to the 60,000 survivors of internment camps in 1990. The U.S. government paid them each $20,000.

While Yale Law Professor Eugene V. Rostow later called the internment camps "our worst wartime mistake," Howard Zinn pointedly asked: "Was it a 'mistake' or was it an action to be expected from a nation with a long history of racism and which was fighting a war, not to end racism, but to retain the fundamentals of the American system?"

Never forget, comrades: This is what we're up against.