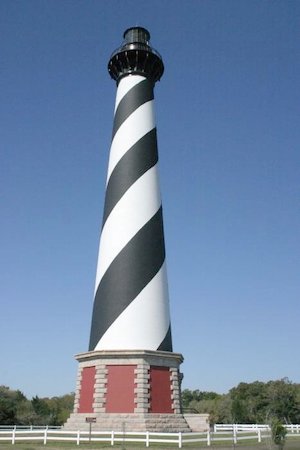 Cape Hatteras lighthouse. By Henryhartley, CC BY-SA 3.0Sept. 11, 2018 (Huffington Post) -- In 2012, North Carolina legislators passed a bill that barred policymakers and developers from using up-to-date climate science to plan for rising sea levels on the state’s coast. Now Hurricane Florence threatens to cause a devastating storm surge that could put thousands of lives in danger and cost the state billions of dollars worth of damage.

The hurricane, which is expected to make landfall on Friday, is shaping up to be one of the worst storms to hit the East Coast. Residents of North Carolina’s Outer Banks and mainland coasts have already been ordered to evacuate. President Donald Trump declared a state of emergency in both North and South Carolina, and a Federal Emergency Management Agency administrator said that the Category 4 hurricane will likely cause “massive damage to our country.”

And the rise in sea levels, experts say, is making the storm surge worse.

Sea level rise is a direct consequence of global warming; the warming of the ocean has resulted in thermal expansion and melted ice sheets and glaciers that are causing the oceans to rise. Since 1950, the sea level has risen 6.5 inches -- a number that sounds small but has actually had major consequences across the country.